Support Us
COTUIT LIBRARY • THE HEART OF THE VILLAGE 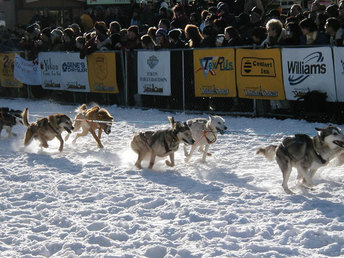 The teams average 16 dogs, which means over 1,000 dogs leave Anchorage for Nome.

The closest finish was in 1978. Dick Mackey finished one second ahead of Rick Swenson. Mackey’s time was 14 days, 18 hours, 52 minutes and 24 seconds. The winner was decided by the nose of the lead dog across the finish line.

The largest number of mushers to finish a single race was 77 in 2004.

A red lantern is awarded to the last musher to finish Iditarod. The longest time for a Red Lantern was 32 days, 15 hours, nine minutes and one second by John Schultz in 1973. The quickest Red Lantern musher Celeste Davis with a time of 13d 05h 06m 40s.

Four time winner, Susan Butcher, claimed Iditarod victories in 1986, 1987, 1988 and again in 1990. Susan retired from long distance racing after the 1993 race in order to start a family with husband Dave Monson, himself a Yukon Quest champion. Their first daughter, Margarith, was born in the spring of 1995.

Dallas Seavey turned 18 on March 4, 2005. He is the youngest musher to run the Iditarod Trail Sled Dog race. The oldest musher to ever compete was Col. Norman Vaughan who completed the race four times.

Rick Mackey won the race in 1983 to become the first son of an Iditarod champion to match his father’s accomplishment. Lance Mackey won in 2007 to become the second son of an Iditarod champion. To further set a record, father and both sons were wearing bib number 13 when they crossed the finish line in first position, and they all three won in their sixth Iditarod. Anyone superstitious? (Emmitt Peters was also wearing bib #13 when he won the Iditarod in 1975.) Add one more for Lance — he had just won the Yukon Quest two weeks before, so now he is the first person to win both the Quest and Iditarod in the same year. 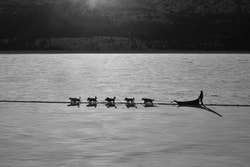 The Story of the Widow’s Lamp
During the days of Alaska sled dog freighting and mail carrying, dog drivers relied on a series of roadhouses between their village destinations. Since these mushers ventured out in most all kinds of weather, for safety reasons they found the idea that pilots rely on, known today as the flight plan. Word was relayed ahead that a musher and team were on the trail, and a kerosene lamp was lit and hung outside the roadhouse. It not only helped the dog driver find his destination at night, but more importantly, it signified that a team or teams were somewhere out on the trail. The lamp was not extinguished until the musher safely reached his destination.

In keeping with that tradition, the Iditarod Trail Committee will light a “Widow’s Lamp” at 10:00 a.m., on the first Sunday in March, in Nome at the trail’s end. This lamp, which will be attached to the Burled Arch, our official finish line, will remain lit as long as there are mushers on the trail competing in the race. When the last musher crosses the finish line, officials will extinguish the “Widow’s Lamp” signifying the official end of the Iditarod for that year.

All too often, public and media think of the race as being over when the winner crosses the finish line, yet there are still teams on the trail. Let it be remembered, Iditarod is not over until the last musher has reached Nome and is off the trail.

*Iditarod staff member, Greg Bill, was instrumental in starting this tradition for Iditarod.

History of the Red Lantern


Often the “Red Lantern” is confused with the “Widow’s Lamp.” They are not the same. An article several years ago in Alaska magazine states that the first red lantern was awarded in the 1953 Fur Rendezvous Race. According to Alaska,

“Awarding a red lantern for the last place finisher in a sled dog race has become an Alaskan tradition. It started as a joke and has become a symbol of stick-to-itiveness in the mushing world.”

How does Iditarod keep Track of the Dogs?
​

Microchipping
What are microchips? The “microchip” is a tiny computer chip programmed with an identification number and encapsulated by a biocompatible material. Microchips are about the size of a grain of rice. They are usually implanted under the dog’s skin either in the shoulder area, back of the neck or behind the ear, where they stay for the life of the animal. The process is quick and easy. Microchips are small enough to fit inside of specially designed hypodermic needles, which enables them to be injected in a manner similar to vaccinating. The needles are sterile and disposed of as clinical waste. Microchip use is not restricted to dogs, but is applicable to all animal species. Animals of any age may receive a microchip implant. They are safe and do not cause any discomfort.

How do the chips work? Special low powered readers have been designed to send a radio signal, which empowers the chip to transmit a specific code. Each chip has its own eight digit number, and extreme care is taken in the manufacturing of the chips to ensure that there are no duplicates.

Animals of any age can be injected with the microchip. Puppies and kittens are can have their chips injected during their initial vaccine series or at any time in their life. Other animals can be treated the exact same way.

There are several companies that are presently making microchips. AVID (American Veterinary Identity Devices) is one of the largest and provides the microchips used by the Iditarod International Sled Dog Race. By race rule, all dogs preparing to compete in the Iditarod are required to be identified by a microchip. Those not already having a chip from previous races will receive one at the time of their pre-race blood work and ECG recordings.

Veterinarians or veterinary technicians perform Microchipping. Typical costs to the owner include the veterinary charges for implanting the chip and a registration fee. A registry is maintained by AVID for locating owners of found animals. Access to this information is attained via an 800 number, twenty-four hours a day. The AVID registry is called PETtrac. Owners pay a one-time fee for registration. There are no annual fees; but there is a charge for information changes such as change of address. Change of ownership requires a new registration.

Since your pet is unable to ask directions or tell anyone who he/she belongs to, we always suggest to our fans that they have their pets microchipped.

In the Iditarod Race, dogs are marked in two ways, by the microchip identification system and by collar tags.

Upon establishing the starting position of each musher, they are given a packet of items at the pre-race banquet that includes their handlers’ armbands, truck passes to get into the chute area and the all-important dog tags. Each tag has the bib number of the musher and a letter of the alphabet. The musher puts the tags on the dogs prior to the start in Anchorage on Saturday. At the start, he/she will turn in a list showing the dog that corresponds with each tag number. For example: ‘Chopper 20-D’. The dropped dog coordination office at the Millennium Hotel has a copy of this list and if for any reason they cannot get a scan on a dog, they can use the tag. However, the musher must be careful to make sure that the information is accurate.

When a musher leaves (drops) a dog at a checkpoint, he fills out a form on that dog and the checker scans the dog for the microchip and checks the collar tag. This information is noted on the ‘dropped dog paperwork’ which will remain with the dog as it is moved back to Anchorage. The dog collar and microchip is rechecked each time the dog is moved along his/her trip to Anchorage. Once in Anchorage, the information is checked by the crew that will transport the dogs to the Eagle River Correctional Institute where a group of inmates care for them until the mushers’ handlers arrive to take them home. The prisons also have a copy of the paperwork and a microchip reader. Each dog is rechecked when picked up to insure the correct dog is released to the handler.